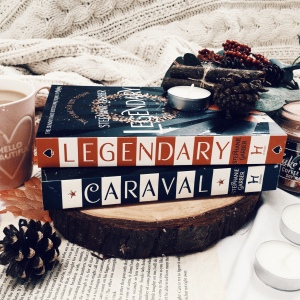 Buy it on Amazon!

“After being swept up in the magical world of Caraval, Donatella Dragna has finally escaped her father and saved her sister Scarlett from a disastrous arranged marriage. The girls should be celebrating, but Tella isn’t yet free. She made a desperate bargain with a mysterious criminal, and what Tella owes him no one has ever been able to deliver: Caraval Master Legend’s true name.

The only chance of uncovering Legend’s identity is to win Caraval, so Tella throws herself into the legendary competition once more—and into the path of the murderous heir to the throne, a doomed love story, and a web of secrets…including her sister’s. Caraval has always demanded bravery, cunning, and sacrifice. But now the game is asking for more. If Tella can’t fulfill her bargain and deliver Legend’s name, she’ll lose everything she cares about—maybe even her life. But if she wins, Legend and Caraval will be destroyed forever.”

I was kindly gifted a copy of this book by Hodder & Stoughton. This in no way affects my thoughts and opinions.

So, after long awaiting the Legendary paperback (I am vain, I need those matching stripey spines) I have finally got my hands on this book and read it! I’m way behind, no surprises there. I know the hype has died down, but I still wanted to throw my two cents in.

The first thing I want to say is that I really liked the setting. This time we were transported to a different country in the ‘Caraval’ world. It was split into different districts, all rich with culture and description with lots of dark, dangerous alleyways and places you wouldn’t want to find yourself alone at night. It definitely developed on the world from the first book, which was great. The whole of this book felt a lot higher stakes – the plot was full of danger and intrigue.

The big difference between this book and Caraval, was that instead of following sweet, perfect Scarlett, we instead followed the flawed, impulsive, selfish Tella who we met in the first book but not in depth. She always seemed like an interesting character to me – I love a more flawed, selfish character that can be unpacked and developed. She was definitely more interesting to me than her sister, who spends this whole books swooning over Julian.

With us following Tella, naturally we see her relationship with Dante develop. We pick up after the events of the first book and Tella has woken up sleeping next to arrogant, bad boy Dante who cares for no one other than himself and treats women like ballgowns – you shouldn’t be seen wearing the same one in public twice. Dante was a bit cliche, but good fun and the way his feelings develop for Tella over the course of the book was very sweet and I definitely enjoyed him more than Perfect Julian. Dante also had competition from Jacks, a new character who had a very Cardan-esque cruel-but-sexy vibe to him. I liked this dynamic, he introduced a level of instability to Tella’s story. He was that kind of character where Tella needed his help, but it came at a much too high cost and you’d never know when or if Jacks would betray her. He kept things exciting and spiced up the romance plotline too.

The reason why this didn’t hit the top ratings for me though was simply that it felt pretty narrow minded. It was set during the game of caraval, but it feels like the author forgot that after about 100 pages. During the first book, Scarlett followed clues and the game was clearly moulded around her but we did get the feeling that she was competing against other people. We got the feel of this magical game that people would give anything to play. This version of Caraval felt like a magical game that only Tella was playing and noone else was even present. The clues were all geared towards Tella and other players were barely even mentioned. I felt like this detracted from the magical feel of Caraval itself – it didn’t feel like she was playing the game, just that she was trying to solve her own personal mystery unrelated to Caraval itself.

The plot is much bigger though so I suppose that’s where this comes from. Perhaps I am expecting too much from it, but I would have liked some more exploration into what was happening around Tella. There’s much more magic though and it’s much more higher stakes so I am interested to see where the story goes from here. The first book was very straight forward – Scarlett needed to find and save Tella. Now Tella is dealing with the possibility of all-powerful beings and what they might do if allowed to break free from their prisons.

The biggest issue I had with Legendary, however, is how obvious the plot twists were, especially the big ending one. I like it when an author is clearly leading you down a path of where you think the book is heading and then BAM! Something wildly different to what you expected happens. Stephanie Garber’s technique when it comes to hinting towards plot twists seems to be outright suggesting something *might* happen and then having that thing happen later on. This made everything so glaringly obvious that when the plot twists did come they were just a bit boring. Until the very end, I was just waiting for something shocking to contradict what we thought we knew, but that just never came.

Overall, I did enjoy this. I liked the vibe and the atmosphere but some of the plot development just wasn’t quite what I wanted it to be.  I might be being harsh, because I felt much the same about Caraval so I wasn’t quite as invested in this sequel as many of you guys were, but I just felt as though the shortcomings in the plotting did detract from my overall enjoyment. I’m interested to find out what happens though and I’ve invested myself now, so I’ll definitely be picking Finale up to see how this all ends!