My Thoughts on the Shadow and Bone Trilogy! 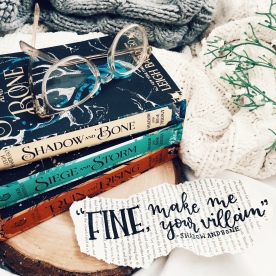 I feel like there is no point in doing a straight review for this series as I am literally the last person on the planet to have read it. So, my plan is to write up some of my thoughts in a bit of a mini review, and react to the assumptions I made at the start of the series and how I feel about them now! Basically, I have no plan and this is going to be a (hopefully entertaining) brain dump on all of my Shadow and Bone related feelings.

When I first began this series, I had a grand plan to write up a reactions blog post as I went along, but about halfway through Seige and Storm I just got super caught up and completely forgot to update it. So instead I am going to pull some of those comments I made in the first half of the series and give my opinions now that I’ve finished the series!

Assumptions I had early on in the series, and how I felt after:

Okay, so this was one of the things I wrote down after the first 100 pages of Shadow and Bone… and at the end… and the 100 page mark of Seige and Storm. All in, I still think he was a pretty boring character. I became really frustrated with him when Alina was becoming more and more powerful and gaining respect and he just couldn’t deal with it. It felt like he didn’t want to support her even though she clearly is extraordinary, because he wants to live his boring life with her as his equal (or even lesser). When they escape from the Darkling and cross the True Sea, they live with Mal as the breadwinner and Alina as his quiet unassuming wife figure. Mal was happy here, but Alina was always destined for more, and when he couldn’t have it this way, he gave up.

As much as he irritated me throughout the series, the epilogue was beautiful. When they’d both lost a part of themselves and returned to a simple existence, they needed each other. I think it’s good that Leigh Bardugo took something from Mal aswell, because I don’t think this would have worked and been so poignant if Alina lost her power and returned to live a simple life with Mal, but he’s not changed or been impacted significantly.

Genya is interesting and there is more to her story

Boy was I right here! When I wrote this, Genya was a mistreated servant to the King and Queen, and in love with the quiet scientist David. Genya’s character arc was incredible to me. I think her attitude towards losing her beauty was fascinating – I don’t think she mourned it the way a character like Zoya would. I loved how her relationship with David developed, how he was called out on his behaviour to her after her scars. I loved that she became the catalyst for Nikolai standing up to his father, that moment was really touching and solidified him as a ruler who would be different. Genya’s progression from siding with The Darkling and the betraying him and then becoming trusted to Alina and Niklolai was such a great arc throughout the series. Some books definitely paint a character as good or bad, but Genya sided with the villain but was redeemed when her motives and backstory were revealed. Just skilful writing all round.

Ding ding ding! I actually screamed when it was revealed that he was Nikolai, as I’d obviously heard the name everywhere. I didn’t realise Nikolai was the prince though, but I’d made a note in book 1 that I thought the younger prince would be important. Everything just fell into place here and it felt so wonderfully put together.

The Darkling has a lot more backstory and motivation

I did not anticipate the scale of this! One of my favourite things to read is a character who’s backstory and motives are revealed and you begin to understand exactly why they are the way they are. I love character psychology. It’s exactly why I love Cardan from The Cruel Prince. He’s so morally grey, but I can pinpoint exactly what has lead him to make his decisions and I love speculating and debating. The Darkling was a bit like this for me. The revelations made by Baghra later on in Ruin and Rising were fascinating and made the Darkling’s final power grab so interesting. That scene where Alina appears to him and he tells her his name and he just wants to hear her say it.. ugh that got me. Heartwrenching. One of the most memorable scenes from the series for me.

The characters were one of the places where this trilogy really shined. The Darkling was such a gritty and interesting villain. I really connected with Genya and I adored Nikolai. I think as Leigh Bardugo’s writing and plotting continues to improve with time across her subsequent series’, along with this excellent characterisation, I’ll have a new favourite author. I’m excited to see what she has to come, especially with more Nikolai in King of Scars!

All in, I really enjoyed this series. It definitely felt like a debut (especially the first) but it was still pretty well written and the plot was twisty and entertaining, full of interesting characters. I definitely feel the potential for improvement in Leigh Bardugo’s writing, which makes me very excited for her Six of Crows duology and King of Scars. One thing I thought she did superbly was laying a breadcrumb trail of details throughout the series that would come back later. At every big reveal I could remember little hints and set ups from earlier in the series. It just gave me that joyous feeling when questions are answered and you just want to yell ‘IT ALL MAKES SENSE NOW!’. If you’ve slept on this series like I did, it’s definitely worth picking it up!